Last month, one of my best friends came to San Francisco for work. My friend Kristen and I originally met in the NYC Celiac Meetup group more than 7 years ago (or is it 8?? We always forget!) and have been friends ever since. We both left the east coast at the same time but keep in touch with regular phone dates, texts, and even bumping into each other randomly at an airport in Chicago! Since we both have celiac and we both love to eat, I knew we needed a gluten-free food crawl when she was in town. We met at her hotel and had a fun-filled day eating our way through San Francisco and beyond. Everywhere we ate was 100% gluten-free!

Anyone that’s gluten-free and has been to San Francisco or Oakland better have stopped at Mariposa. This dedicated gluten-free bakery is the best. Croissants, bear claws, “hot pockets,” and so much more are on the menu every day. I never leave SF without a stop at Mariposa and at least one baguette in my pocketbook and one croissant in my mouth. I am also a huge fan of the New Orleans-Style Iced Coffee from Blue Bottle Coffee so I took one to go. Take some time to explore the Ferry Building if you are there. There are lots of fun shops and kiosks throughout the building. 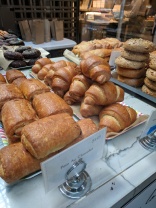 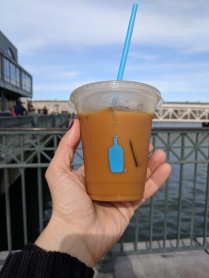 It was a beautiful and unusually sunny February day in San Francisco, so we decided to hop on the ferry to Sausalito. In all my times I’ve been to San Francisco, I never took a boat ride so this was a real treat for me. We cruised by Alcatraz and had great views of the Golden Gate Bridge.

Celiac Besties: Kristen and I in Sausalito

When we arrived in Sausalito, Copita is literally across the street. Go early or make a reservation because this restaurant gets busy. The entire restaurant is 100% gluten-free and the cocktails are amazing. Plus, they serve you fresh jicama when you sit down which is one of my faves! We got one of the specials of the day, kind of a cross between a quesadilla and empanada stuffed with cheese and jalapenos, and house margaritas.

Everyone needs a gluten-free croissant on a boat at least once in their life. #BestDay

A windy day at sea

I forgot to mention that Kristen and I were food crawling our way through San Francisco on Super Bowl Sunday. Neither of us could care less about football but when we saw an ad for a drag queen Super Bowl party, we knew we needed to be there. The highlight of our party was Sue Casa, our fabulous hostess with the mostess. Kristen and I had a BLAST at this party and were quite thankful tequila in margaritas is naturally gluten-free. 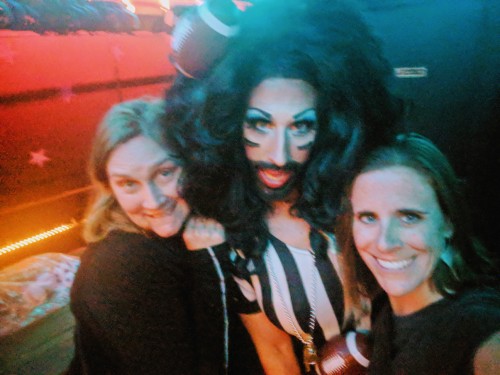 I think the best part was when I started following Sue on Insta, she told me she was also gluten-free. HAHA! What are the chances?!

Kitava Kitchen was a new-to-me restaurant that I had on my list to try for a few months now. The restaurant itself is in an old McDonald’s that was converted to a completely gluten-free restaurant. The menu includes bowls, tacos, salads, small plates, broths, and daily specials. I was so excited to see General Tso’s Chicken on the menu since you rarely can find this gluten-free. We also ordered one of the daily specials which had pulled pork, beans, fried plantains, and rice. The carbs helped absorb some of the margaritas from the Sue-per Bowl party.

Just when we thought we couldn’t eat anymore food, we headed to Pica Pica Arepa Kitchen. After Mariposa, this is my favorite 100% gluten-free restaurant in San Francisco. This Venezuelan restaurant has empanadas, arepas, yuca fries, plantain and taro chips, and so much more. Seriously, if I could eat this food for the rest of my life I would be quite happy. Since the whole restaurant is totally gluten-free, you can eat everything on the menu. I am pretty sure we did! Plus, their garlic green sauce is addicting and I want to take it home with me every time I am at Pica Pica. We pretty much had to roll back to Kristen’s hotel after this last stop on the trip. 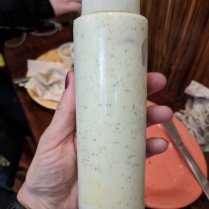 I was sad to see such a wonderful day come to an end but we seriously had a great time catching up, exploring San Francisco, and eating non-stop. To anyone that thinks having celiac disease is limiting, this post intends to prove you wrong. We ate and ate and ate and everything was 100% gluten-free. Yes, it did take a little research before we started our day, but it was totally worth it. Please never let your celiac disease stop you from seeing and eating your way through the world!

Thank you Kristen for being one of the very best friends a girl can have! So thankful celiac disease and a crazy banana lady (another story for another day) brought us together in NYC so many years ago! Come back any time.

Nothing in this post was sponsored. Everything was on our own dime!

Living with celiac disease since 1981 and eating gluten-free long before it was "trendy", Erin Smith has a unique perspective of growing up in the gluten-free community; Founded Gluten-Free Fun in 2007; Founded Gluten-Free Globetrotter® in 2011; Founded GlutenFreelancer® in 2014. Erin was the lead organizer of the NYC Celiac Disease Meetup group, a social community of more than 2,000 members for over a decade. She is the founder of the Santa Cruz Celiac support group. Erin currently resides in New York City and lives 100% gluten-free.
View all posts by Erin Smith →
This entry was posted in california and tagged gluten-free, restaurant, travel. Bookmark the permalink.

3 Responses to A Gluten-Free Food Crawl in San Francisco