Another Gluten-Free Meal in Prague

After such a wonderful experience at Restaurace Na Zlaté křižovatce in Prague, I was sure that I would need to eat every gluten-free meal there. Although I wish I had gone back to the first restaurant, I did find another restaurant that offered a full gluten-free menu right in the heart of Prague. 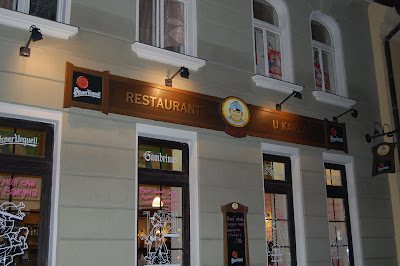 Outside of Švejk Restaurant U Karla 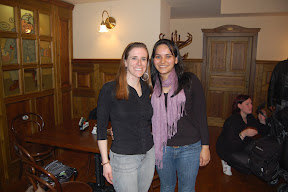 Limora and I at dinner

I had arranged to meet a new TravBuddy friend, Limora, on Saturday night for dinner, so I suggested Švejk Restaurant U Karla which happened to be right near her hostel. We were seated promptly as we passed by the accordion player and tables full of big meals and bigger beers. I asked for a gluten-free menu and the waiter quickly brought one over.

I was pleased to see the gluten-free menu at Švejk Restaurant wasn’t much different from the traditional Czech menu my friend had in front of her. I was pleased that I was going to get another traditional meal that was safe for me to eat. On a recommendation from the waiter, I decided on the gluten-free beef goulash with roasted sausage, onions, homemade gluten free dumplings. I also asked for a side of gluten-free bread and the waiter insisted the dumplings were “enough bread!” I ordered a Celia beer as well and then began to explain Celiac to my dining companion. 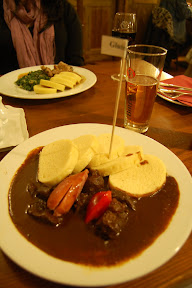 My goulash and dumplings came and I was excited to see a “GLUTEN-FREE” flag right in the middle of my plate. Another happy sigh of relief escaped my mouth. I explained to Limora that is just so comforting to know that your food is safe. The meal was heavy and saucey and bready and exactly what I wanted from this traditional Czech dish. I think I started to realize why Czechs drink so much beer; it is the perfect balance with the salty and thick sauced-meal that I was having that night. It was all so filling that I didn’t even have room for dessert. 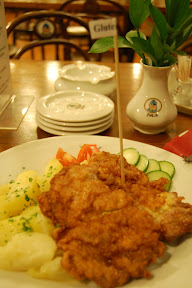 I went back to Švejk Restaurant U Karla my last night in Prague because I really wanted to try the Pork schnitzel in cheese gluten free dough. I was excited that my waiter remembered me and he immediately brought me the gluten-free menu. If you don’t know what schnitzel is, the best way I can describe it is breaded and fried meat. Can you say delicious?! This was the first time I ever had a deep-fried anything in a restaurant and I devoured the dish. Of course, I also washed this down with another one (or two!) gluten-free beers. Seriously, I think this was my favorite dish in Prague. Can you go wrong with deep-fried anything? This was the perfect last dinner in the Czech Republic. Check out the picture of the food and the gluten-free flag.

You should definitely add Švejk Restaurant U Karla to your list of gluten-free places to eat in Prague. Make sure you go to the right “U Karla” though, because they seemed to be a chain of restaurants.

Living with celiac disease since 1981 and eating gluten-free long before it was "trendy", Erin Smith has a unique perspective of growing up in the gluten-free community; Founded Gluten-Free Fun in 2007; Founded Gluten-Free Globetrotter® in 2011; Founded GlutenFreelancer® in 2014. Erin was the lead organizer of the NYC Celiac Disease Meetup group, a social community of more than 2,000 members for over a decade. She is the founder of the Santa Cruz Celiac support group. Erin currently resides in New York City and lives 100% gluten-free.
View all posts by Erin Smith →
This entry was posted in Europe, Prague and tagged gluten-free, Prague, restaurant. Bookmark the permalink.

5 Responses to Another Gluten-Free Meal in Prague