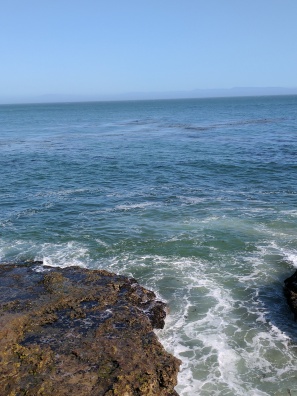 The weather in my not-so-new hometown Santa Cruz, California has been absolutely beautiful lately. Sunny skies, cool ocean breezes, and dolphins sightings from the beach! I’ve been running by the ocean and riding my bike as much as possible. It’s been hard to stay inside and work over the past few weeks especially since I am trying to make this a summer of saying “YES” to new experiences.

Besides being a local, Santa Cruz is a great summer tourist destination for those in the San Francisco Bay area and beyond. Tourists flock to the Santa Cruz Beach Boardwalk, the beaches, and the redwood forests all found within Santa Cruz County. There really is so much going on each week that you will never go bored in Santa Cruz.

The most popular question I get through my Santa Cruz Celiac Facebook group is where to eat which is why I am especially excited about my first post on the local website SantaCruzLife.com. This list is only desserts, but let’s be honest… that is definitely one of the most important food groups. 🙂  Stay tuned for future articles about where to get gluten-free sandwiches, burgers, salads, and more.

Click here to read my Gluten-Free Desserts in Santa Cruz on SantaCruzLife.com.

Melinda’s GF is a 100% gluten-free bakery in Capitola, CA

Living with celiac disease since 1981 and eating gluten-free long before it was "trendy", Erin Smith has a unique perspective of growing up in the gluten-free community; Founded Gluten-Free Fun in 2007; Founded Gluten-Free Globetrotter® in 2011; Founded GlutenFreelancer® in 2014. Erin was the lead organizer of the NYC Celiac Disease Meetup group, a social community of more than 2,000 members for over a decade. She is the founder of the Santa Cruz Celiac support group. Erin currently resides in New York City and lives 100% gluten-free.
View all posts by Erin Smith →
Gallery | This entry was posted in california, general and tagged Celiac, gluten-free, restaurant, travel. Bookmark the permalink.