It is that time of year when New York City comes alive with all things Christmas. The lights, the Christmas trees, the music, the markets, the food! New York City is just bursting with holiday cheer. I love being a tourist in my own city during the holidays. There are just so many twinkling lights to see and so many pop-up markets to enjoy.

One of the popular holiday markets in New York City is the Bryant Park Holiday Shops, formally known as the Bank of America Winter Village at Bryant Park. This “village” takes over the entire park with it’s crown jewel, an ice skating rink, at the center of the park. Gone is the lush grass of summer with the newly laid ice for the winter!

According to the Winter Village website, “The Holiday Shops include more than 125 boutique-like shops offering exquisite gift ideas from distinctive apparel to jewelry, decorative goods, local foods, and much more. There’s something for everyone – adults, kids, and even pets.”

I noticed that the 2014 Winter Village has more gluten-free choices than ever before. You can now shop, ice skate, see the Christmas tree, and eat your way through the Bryant Park Winter Village. 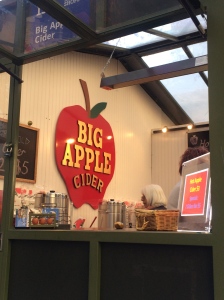 Blossom Du Jour: An offshoot of the popular restaurants, this 100% vegan kiosk sells some gluten-free, packaged snacks such as gluten-free gingersnaps and gluten-free chocolate cupcakes. They also sell packages of goji berries, gluten-free energy squares, and dark chocolate. According to the packaging, the products are produced in a shared facility with wheat so use caution when eating. 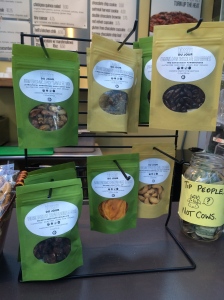 MissTea’s Organic Tea: Made in Brooklyn, these local, organic teas come in both caffeine-free and with caffeine. You can purchase hot tea to go or you can buy a nice gift set for friends and family. 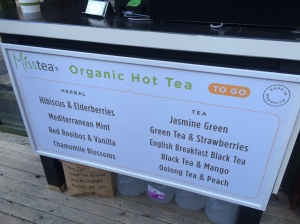 No Chewing Allowed: This kiosk is incredibly sweet-smelling and the guys working inside entice you with free samples of their chocolate French truffles. They also sell hot chocolate and chocolate bars. Note, the truffles are not made in a dedicated gluten-free facility.

Pickle Me Pete: Pickles, lots and lots of pickles! 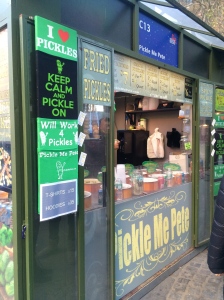 Raaka: This chocolate is not only gluten-free, but it is USDA organic, nut-free, soy-free, vegan, and Kosher!

The Jam Stand: At this self-proclaimed “Brooklyn’s happiest food company”, you can buy jam in many delicious flavors. The thing that caught my eye is that you could sample the jams on little wooden spoons and not the usual pieces of bread that usually are a major concern for cross-contamination. The jams are made in a gluten-free facility and all are gluten-free except for the Bourbon Jam. The company was quite knowledgeable about alcohol distillation but they said to be on the safe side they would not list the Bourbon Jam gluten-free.

The Lucky Sailor: FRENCH FRIES!!! This stand has three dedicated fryers and all it sells is gluten-free Belgian fries. The sauces are produced off-site and while the producer says they are gluten-free, the owner of The Lucky Sailor says he cannot guarantee 100%. If you are celiac, you might want to skip the sauce and just go for the fries.

This Pie is Nuts: I first learned about this company over the summer at the Astoria Flea. Since then, I have followed Diana, the founder of This Pie is Nuts, on Instagram and watched her work like a machine to build her business. I swear, Diana and her husband never sleep! These pies are paleo, vegan, and gluten-free!

This Pie is Nuts

Top Arepa: “The traditional Arepa is a staple food in Colombia & Venezuela and consists of flat round cakes with melted cheese inside.” Arepas are traditionally gluten-free and this kiosk keeps a separate griddle for the gluten-free areaps/toppings.

Two Tablespoons: Two Tablespoons gets around… in a good way! I’ve seen them at Madison Square Eats and at Broadway Bites. Now they are in Bryant Park serving up gluten-free chili and loaded baked potatoes. A healthy and gluten-free way to warm up in the park!

Woops Macarons: Macarons are made from egg whites, sugar, and almond flour, making them naturally gluten-free. The macarons are filled with either buttercream, jam, or chocolate ganache and come in a wide variety of flavors and beautiful colors. They are not made in a dedicated gluten-free facility. The cookies at Woops are NOT gluten-free. 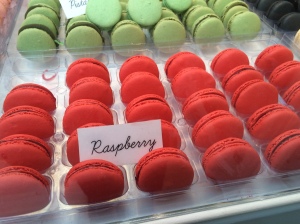 These macarons are naturally gluten-free

Living with celiac disease since 1981 and eating gluten-free long before it was "trendy", Erin Smith has a unique perspective of growing up in the gluten-free community; Founded Gluten-Free Fun in 2007; Founded Gluten-Free Globetrotter® in 2011; Founded GlutenFreelancer® in 2014. Erin was the lead organizer of the NYC Celiac Disease Meetup group, a social community of more than 2,000 members for over a decade. She is the founder of the Santa Cruz Celiac support group. Erin currently resides in New York City and lives 100% gluten-free.
View all posts by Erin Smith →
Gallery | This entry was posted in New York and tagged gluten-free, markets, New York City, travel. Bookmark the permalink.